Akimasa Miyake has recently published in a new journal Quantum Science and Technology in collaboration with Stephen Bartlett (University of Sydney) and Gavin Brennen (Macquarie University), presenting a scheme of robust quantum sensing using one-dimensional strongly-interacting spin chains. It takes advantage of passive error-preventing properties of a symmetry-protected topologically ordered phase, to measure the direction and strength of an unknown electronic field.

Jacob Miller, Keith Sanders, and Akimasa Miyake have recently published a paper in Physical Review A presenting a distinctive means of demonstrating the unique computational power inherent in quantum mechanics. Their work follows other proposals in the growing topic of “quantum computational supremacy”, which aims to construct a realistic device implementing a sampling-based computational task which is otherwise impossible with any modern digital computer. Such sampling tasks must achieve a careful balance, where they are both easier to implement in a laboratory than full quantum computation, but must also be hard enough to require genuinely quantum effects to solve.
The proposal put forward by Miller, Sanders, and Miyake has several desirable features. First, it can carry out its computational task in a constant amount of time, helping to mitigate the harmful effects of experimental noise. Secondly, it is capable of seamlessly verifying the correct operation of the difficult sampling task with exactly the same resources required to perform the sampling itself. This latter property is important, since the difficulty of the sampling generally makes it extremely hard to check whether or not a realistic device is actually achieving quantum supremacy. While previous works had satisfied one or the other of these properties, the current proposal uses the framework of measurement-based quantum computation and insights from the study of quantum phases of matter to simultaneously achieve both.
The full article can be found online at Phys. Rev. A 96, 062320 (2017).

(a) Quantum circuit to sample probability distributions related to certain Boolean functions. The task is expected to be intractable to modern computers. (b) Our measurement-based implementation, which realizes a sampling task and its verification procedure under the same resource requirement.

Demonstration of the Jaynes-Cummings ladder with Rydberg-dressed atoms

The Jaynes-Cummings model, a widely employed theoretical framework in cavity quantum electrodynamics, is experimentally tested on a platform involving Rydberg-blockaded atomic ensembles. The work opens the way to a richer exploration of protocols for quantum control or, more broadly, quantum computing. 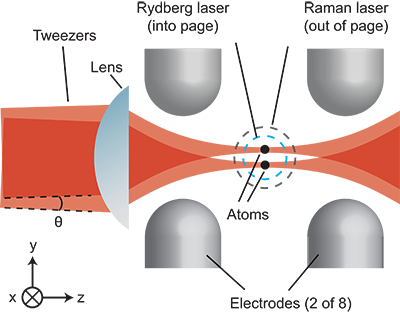 FIG 1.  Experimental setup.  The Rydberg laser and the Raman lasers are  aligned along the x axis.  Two optical tweezers are formed by two lasers  with an angular separation θ..  In this setup, eight electrodes control the electric fields near the trapped atoms.  The bias magnetic field is applied along the x axis.

The authors show that two complementary forms of symmetric topological order are particularly useful for quantum computation. While previous resource states have only utilized the first form, a new Union Jack state is constructed to study the second, stronger form. While both are sufficient to achieve any desired computation, the quantum order found in the Union Jack state can achieve this using simpler measurements, pointing towards a surprising new resource for simplifying quantum computation.

The full article is available online at http://www.nature.com/articles/npjqi201636.

(Left) The Union Jack state, a new state with a strong form of symmetric quantum order which makes it useful for quantum computation. (Right) One step in the procedure for computing with the Union Jack state. Measurements on half of the sites drive the system through a quantum phase transition, which leads to a computationally useful graph state being randomly condensed on the unmeasured spins.